As I began researching for our trip, I came across the 'one-bag' concept - the idea, obviously, being to travel with only one bag (each). This seemed like a pretty achievable goal in my mind - I normally only travel with one bag, and thought it wouldn't be too hard to stick to for an overseas trip.

I then came across the idea of travelling with not only one bag, but one carry-on bag. I instantly dismissed this idea. Yes, I'm sure it's great for some people, but really, how could I achieve that? I couldn't possibly take everything I need for 7 weeks to Europe - even if it is Spring - they still have the temperatures of a Townsville winter!

But I kept reading, and kept coming across this idea. People who travelled the world, for a year - or more - with only a carry-on bag. And then I came across this girl's packing list for her carry-on bag. She can really fit all that in a carry-on bag? I thought. That's when I decided it was time to re-visit current carry-on bag size restrictions. I discovered most airlines have a limit of 105 - 115 linear centimetres. For JetStar in Australia, this means it cannot exceed 56 x 36 x 23cm (total 115cm). For RyanAir, the notoriously strict budget European airline, this means 55 x 40 x 20 (total 105cm). Limits tend to vary between 7 and 10kg. If you're not flying much, this means fewer airlines whose restrictions your bag has to meet.

And I decided that if they can do it, so can I. Andre decided he wasn't going to go that extreme, but I decided I would give it a shot. Most airlines allow you your main piece of carry-on luggage, and something smaller like a handbag, which is convenient. So I set about finding a backpack that would not only fit carry-on requirements, but that would maximise on space, and not be too expensive

I found it difficult. Australians have limited options - I found several great bags on the internet, but most were either available only in America or charged almost as much as the bag cost to ship to Australia. Combine that with the fact that Australian prices are so much more expensive than many other places in the world, and I was having trouble. I wanted something:


I finally found it. Kathmandu is generally not known for its cheap prices, but if you become a Summit Club Member and take advantage of the fantastic sales they have every so often, you can snag a bargain. So Andre and I both bought the Litehaul travel packs - I bought the 38L version and Andre got the 50L version. We scored them for 50% off, which brought mine down to around the $120 mark and Andre's to about $170. I have since seen them under $100. (This model is now out of stock and a new model is in, so it will probably be a while til the new model comes down in price). I have the blue one and Andre has a plain black one. (I actually wanted the grey and red one, in the middle, but our branch didn't stock that colour!) 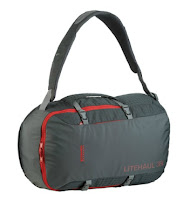 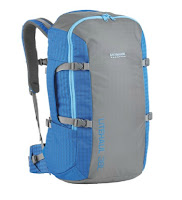 Yes, the waist strap is removable and becomes the shoulder strap if you want to turn it into a shoulder bag!

The great thing about travelling with 2 people is that some things you don't need to take 2 of, so can be shared between the two bags. For example, we really only need one toiletries kit (just with two toothbrushes!) and one camera.

We also bought a new toiletries bag, as both our toiletries bags were too big for the scaled-down luggage we wanted to take. And so, due to their awesome sale and the fact we were members (add on the fact mum bought it off us to give to us as a Christmas present), we bought a Kathmandu toiletries bag too. 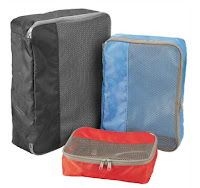 Throughout my reading I also came across packing cubes. They're more rectangular prisms, not cubes, so I don't know why they have that name, but they do. The idea is that it helps keep your gear separate and organised, so if you have to pull out something near the bottom of your bag, you haven't disrupted the entire bag's contents to get it out. It also stops little things from wriggling all the way down to the bottom. I thought they looked convenient but probably wouldn't have bothered buying any... except, again, we found them at Kathmandu on sale! I can't remember how much these cost us. 50% off maybe, or perhaps 3 for the price of 2, I'm not sure. (Edit: I found the receipt. They were 3 for the price of 1!) Anyway, they also ended up as Christmas presents (thanks Grandma and Grandad!)


If you don't live in Australia, there are some great websites where you can buy very similar items. I found myself drooling over many things at REI, Amazon and eBags. In Australia, Anaconda stocks some pretty good gear too.

And if you are interested, you can also find plenty of articles online about travel clothing, too - quick-dry, moisture-wicking, light-weight, etc. If I was going to travel the world for a year I would look seriously into getting clothes like that, but not for a 7 week holiday. Really not worth it.
Posted by Leah at 10:33 PM