Fri 4 May
Please note we can't always publish these posts the day they're written due to lack of wi-fi. So I'll put the date at the top of the post so you'll know what day it was intended for!
Today we are on the train from Tignes to Lauterbrunnen in Switzerland. The trains took a bit of figuring out but that's another story.
Our two days in Tignes were excellent. The snow conditions were far better than we could have imagined. This week is the last week of the season and we were only expecting the glacial ski runs to be open (these runs have snow on them all year and are reopened later for summer skiing). However it's been an amazing end to the season and there was snow all the way down to the village, meaning we could ski in and out of our apartment building. It snowed the first two nights we were there. The second night it was a bit warmer and all the new snow was gone by the morning, but the first morning there was a good two to three inches of snow on exposed surfaces that hadn't already been walked or driven on. 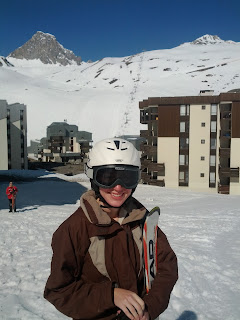 The first day we spent most of the morning getting the rust off our skiing and snowboarding skills on an easy run near by. Before lunch we decided to try another longer run on the opposite side of the valley. It was hard. It was only marked as a blue run but it had some long, bumpy and steep bits that took a lot of work. Steep is OK if it's not too long and there's enough flat at the bottom that you can afford to get some decent speed up (which this one didn't have until the very bottom), and as long as it's not so bumpy that you risk your ski getting stuck in a rut or bump and sending you flying. It was also a cloudy day which really doesn't help with skiing on bumpy runs. Michelle stacked it half way down and twisted her knee, which meant I had thoughts of dislocated knees, medivacs and travel insurance going through my head as I stood there waiting with her to see how her knee was, melting in the sun that showed its face just long enough for the toughest run we did that day. Ugh. And then we had to get the rest of the way down the run, after which it was time to rip off the gloves, unzip the jacket and lie in the snow for fifteen minutes. André says he was awesome and ripped up on his snowboard, but he thought it was hard too. 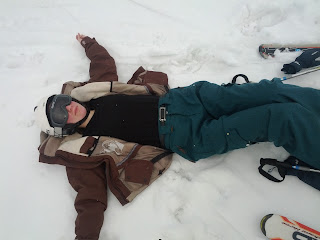 Lunch was definitely a welcome break then, so Michelle and I had hot dogs (made with baguettes!) and André got a cheese burger and we shared fries. 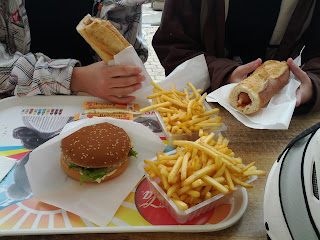 After lunch we went back to the easier run we'd done earlier that day till about 3 o'clock, another unexpected perk as we had read that late season skiing generally was only good until lunch time. 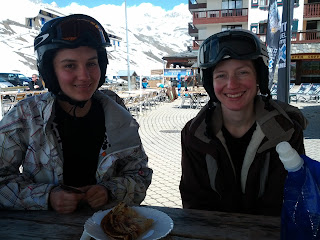 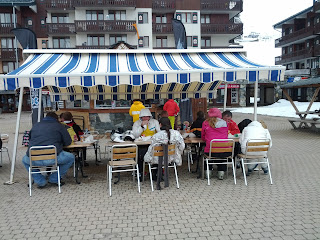 The second day was a lot of fun with no injuries, although Michelle's knee was still sore. We found another long blue run to do which was a really fun run to do. The snow was a little icy the second day, but I found I handled my skis better, probably because I am used to Australian snow which is often a bit icy! The run we did had a steep section also, and the ice made it a bit hard going, but it was a sunny day, there were no bumps, and there was a nice flat at the bottom of it to cruise across before the next downhill. The rest of the run was steep enough that we got some nice speed, no long flats to give André problems on his snowboard, and the snow was just soft enough that it made turning nice and easy and we could just swerve our way down the mountain. Probably the best skiing I've ever had.
It was a long run though, so tired us out, so after doing it a few times decided to get morning tea in the form of a banana and chocolate (not nutella!) crepe. After morning tea we decided to head up the glacier. We decided not to take our skis up as there are mainly red and black runs on the glacier and we didn't know how easy or hard the blue run down from it would be. If we weren't so tired we would have tried it anyway, but as I was tired and Michelle's knee was still giving her problems, we decided just to go up as foot passengers for the view. 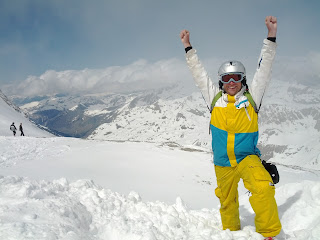 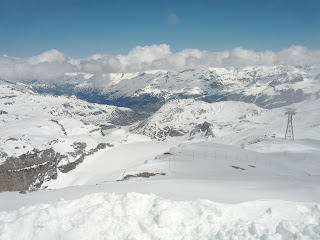 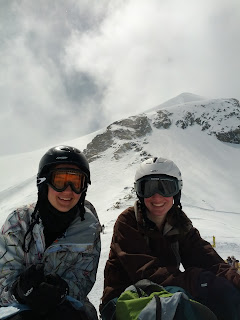 We played in the snow, took photos and André got dizzy from the altitude. Afterwards we had lunch (the best cheeseburger I've ever had) and returned to the run we did that morning. However by 3 pm it was slushy and super cut up. It took a lot more work than it had that morning, but we still got some good video of each other coming down the mountain.


So now (missing our bus from Tignes to Bourg St Maurice and having to get a taxi to get to our train on time) we're on our way to Lauterbrunnen via Lyon and Geneva.
Posted by Leah at 9:23 PM