After my last very condensed post about Paris I thought I should write some more about our stay there. The day after our big day out it was drizzly and basically not much good for doing anything except museums. However as the next day was forecast to be rainy too, André and Michelle decided we should save the museum for then. It wasn't too rainy so we headed up to Montmartre to see the Sacre Couer Basilica and Bohemian quarter of Paris. 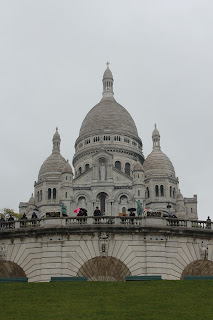 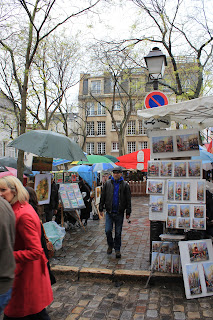 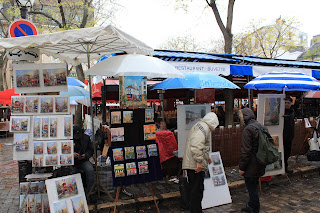 Because it was rainy the view wasn't as great as it could have been, but we had a look at the inside of the basilica and also inadvertently stumbled across Place du Tertre, or artists' square (which I really wanted to see) where we bought some paintings.
If we had time and it wasn't so cold, I would have thought about getting a portrait done. We saw some being done and they were very good. Instead we went to get lunch in a little local pizzeria, with a live pianist (well, a late lunch, or early dinner, or big afternoon tea - it was about 4:30pm but we had a late start due to our big night the night before!). On our way out of Montmartre we stopped by to see the Moulin Rouge. 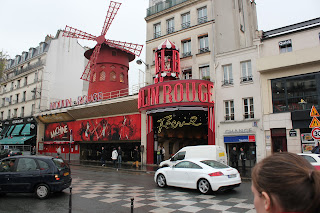 After Montmartre, we went to see Notre Dame. We didn't realise there would be a service on at the time, so while we were still allowed in to see the church, we couldn't go up the towers. We also saw some more artists selling their wares at little semi-permanent stalls along the river and bought some more paintings. 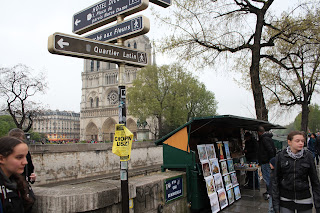 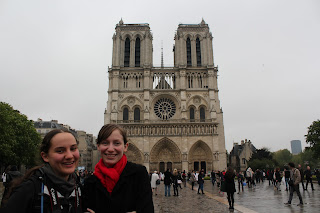 While in Paris we bought groceries so we could make our own breakfasts and some of our other meals, as we had a self-contained apartment.
This meant we could take sandwiches and fruit with us for lunch, and we had microwave meals one night, croissants another and toasted sandwiches another. Often we would buy something else at lunch time (as well as our sandwiches), so lunch was our biggest meal. This saved on buying expensive dinners out. We had two grocery stores very close to our place, a Monop' (a mini Monoprix) and a Franprix. Our landlord advised us the Franprix would be cheaper but we found the staff in the Monop' friendlier and they bag the groceries for you- at Franprix you have to do it yourself which can be a pain if you have a lot. The prices weren't much different anyway.
The following day actually turned out to be quite sunny, but I really wanted to see Musee d'Orsay so we went there anyway. 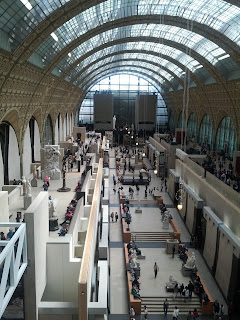 Musee d'Orsay is basically an art gallery which is most well-known for its collection of impressionist paintings, so we saw Monets, Toulouse-Lautrecs, Picassos, van Goughs, and works by many other famous artists. Van Gough's Starry Night is not housed  there, but we did see Monet's Giveny waterlily paintings.
We also tried to head up the Eiffel tower that day, but it was too windy and the top was closed. Instead we went to a nearby cafe where Michelle and André had a banana and nutella crepe (I don't like nutella!) and we shared a plate of macarons. I knew eating near the Eiffel tower would be expensive, but we realised how expensive later when we saw banana and nutella crepes being sold for 3.50 euros when we had paid about 9! Lesson learnt: do not eat near the Eiffel tower! As the wind did not die down, we headed up to Montmartre again as it was so sunny. The view was excellent and there were a few street performers about, and lots of crowds. Food in Montmartre is much cheaper, especially if you buy it from a take away stand/ hole-in-the-wall type outlet rather than a cafe or restaurant. That night for tea André's Salmon crepe was about 4 euros and Michelle's and my chicken baguettes were less than 3 euros each. This was only a street away from Sacre Couer, so if you go further away it probably gets cheaper again.
On our last full day in Paris the weather finally cooperated and we got to go up the Eiffel tower! We took the stairs up to the second level then the elevator to the top, which was cheaper and the line was shorter. We still queued for about an hour though. We also checked out an old castle in eastern Paris called Chateau de Vincennes. You can walk into the complex for free, but certain buildings within the complex charge for entry. We were there so close to closing that didn't bother going in to any of them and just admired them from the outside.
We have now left Paris and took the train this morning to Bourg St Maurice, then a bus up to Tignes where we will spend the next two days skiing and snowboarding! The snow cover is fantastic for the last week of the season (looks like an Australian snowfield in the middle of winter :P) but it has rained a little this afternoon, so hopefully it snows tonight!
Posted by Leah at 1:25 AM