Our first day in Brugge turned out to have beautiful weather. Breakfast was a little bit odd, they only served various breads with spreads - white & wholemeal bread, raisin bread, toast, bread rolls and croissants. No cereal, fruit, yoghurt etc. But they did have an amazing chocolate spread. It tasted just like my favourite chocolate spread which was the stuff Woolworths' homebrand used to make about fifteen years ago before they added hazelnuts. 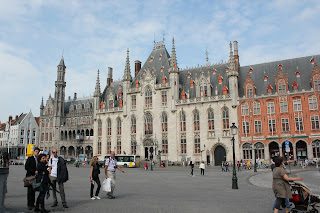 We first decided to visit a local brewery which has now been operating for six generations, De Halve Maan (The Half Moon). We took a guided tour of the brewery, with the traditional beer-making methods explained. It was a pretty interesting tour as far as breweries go and they had some good displays with a lot of the old equipment retained. After some beer tasting at the end (I don't like beer at all, so Andre had mine), we had waffles and ice-cream for lunch. We got Brussel waffles, which are much thicker than the ones we typically have in Australia, but very light and crunchy. I had butterscotch sauce on mine and Andre had chocolate on his. They were quite good but I didn't think they were anything especially better than the ones we make ourselves at home. 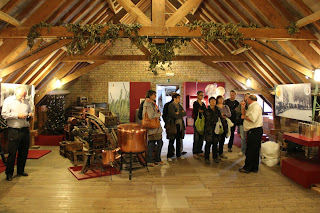 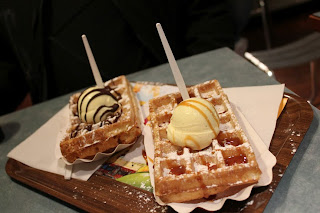 Afterwards we went to the Choco-Story Museum which was pretty interesting. It's a museum about the history of chocolate, featuring the Aztecs, Mayans and Spanish, its development from being a popular drink for the European upper class into a common sweet, the different equipment used in its production and consumption over the years, how it is made, how it is grown and about fifty years' worth of different chocolate packaging. It also had a chocolate-making demonstration where you got to eat the final product, but it was a hazelnut praline so Andre got the rest of mine. Europeans seem to have this obsession with putting hazelnut in all their chocolate!

After the chocolate we walked across to the northern end of the old town to see some old-school windmills. None of them were open, but it was interesting just to get to see them. Then we walked back into the town to take a boat ride through the canals. Brugge is very pretty from the water, and one bridge we went under was so low we had to duck our heads! There are also lots of swans, ducks and geese around the canals in Brugge, and many of them had ducklings and we even saw a cygnet!

That night at home I checked my emails to check the details of a battlefields tour I had booked for the next day. Or so I thought. Once I read the email, I realised the tour was supposed to have been that day. Whoops. So I raced off a very apologetic email to the tour company, and tried to figure out how I was going to organise a replacement tour within two days. In my email I asked if they happened to have any places on their Sunday tour, but when I went back and read my original emails requesting a booking, I noted that they didn't have any space on the Sunday or Monday. Hmmm. I had a look at the pamphlet for another company I had considered booking with, and they said that we could call anytime between 7:30am and 10:30pm. It was just past 10:30pm by that point, so I decided I'd call them first thing the next morning to see if they had any spaces on their Sunday tour, as they didn't run tours Mondays.
Posted by Leah at 10:45 PM