Munich to the Rhine Valley

29 & 30 May
We did not pre-book our tickets from Munich to Bacharach in the Rhine Valley as we had checked on a ticket machine previously and found the necessary trains ran reasonably often. So we decided we would take an afternoon train to give us a bit more time in Munich.

In the morning we first went to the hoptbahnhof, or central station, to put our bags in lockers. We also bought our tickets then so that we could make any necessary seat reservations. From there we went back to Marienplatz to explore the markets that had been closed the previous two days. We bought some cherries and a beer for André but before long it began to rain. We headed back in the direction of the train station, ducking into a few shops along the way to escape the rain and buy a few more presents and souvenirs.

Because the rain seemed to have set in, we went back to the Hoptbahnhof early, where we found a post office to send another parcel back to Australia. Lucky we did go back early, because there was quite a line up in the post office. After that it was pick up the bags, get some lunch and find our train to Bingen am Rhein. We switched trains in Bingen, to a local train that took us the last twenty minutes up the valley to Bacharach.

Bacharach is only a very little town, with one main street a few hundred metres long and half a dozen smaller back roads. It's filled with old half-timbered buildings and has vineyard-covered hills behind it, with a castle on top (which is now a youth hostel). Our pension was located down one of the side streets, and was a half-timbered building built onto the old city wall. The room was very spacious and was actually a triple room just for the two of us, and we got a private bathroom again! The first night we had dinner at a small restaurant just down the road from our pension, and sat by the front window which opened onto the cobble stoned street outside. 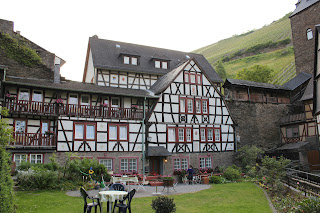 For our first full day in Bacharach we walked up the hill behind our pension to see the castle Burg Stahleck. It wasn't a long walk, and along the way we also saw the ruins of a gothic chapel. Once we got to the castle we couldn't go in to see too much, as it's a youth hostel, but they did have a courtyard we went into. It gave a good view of the valley below and part of the castle exterior. 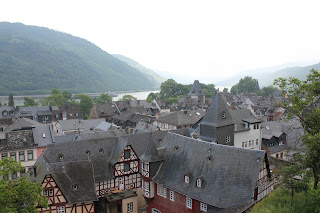 We didn't spend long there before catching a train north to the little town of St Goar. We explored the idea of taking a ferry, but it was so slow, didn't run often from Bacharach and even less often in the direction we wanted, and was a lot more expensive than the train. We went to St Goar primarily for the complex of ruins of the castle Burg Rheinfels which stands on the hill above it. Part of the castle has been restored into a 4-star hotel now, and part into a restaurant and gift shop. Otherwise it stands in ruin, but when you purchase entrance (only 4 euros) you are given a leaflet which outlines two routes around the complex, explaining what each area was. The directions on it weren't always easy to follow, but we did both paths around the castle and ended up with a good understanding of how the castle once was. The ruins are in pretty good condition, with a lot of rooms, tunnels, towers and passageways still intact. 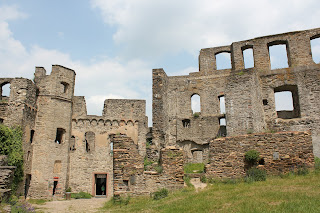 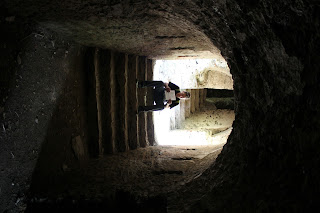 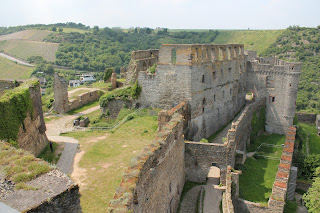 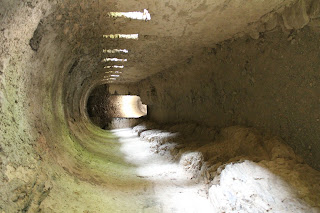 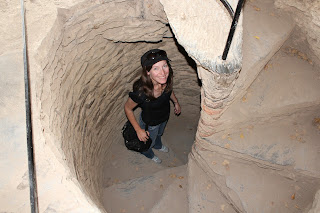 We spent most of the day at Burg Rheinfels and watched ferries go by on the river while we waited for the next train back to Bacharach. Dinner was at a restaurant with an open courtyard surrounded by half-timbered buildings where we were appropriately German and André had pork roast while I had what I think were pork sausages and fried potato. We finished the day with gelato! I had mango and lemon which was very good, but still not quite Giolitti's!
Posted by Leah at 1:19 PM