The next morning I had an email from the first tour company saying they didn't have any space in their tours for that day, as I had expected. So I called the second tour company, Quasimodo tours, and fortunately the man I spoke to said yes, they had space! We arranged to be picked up in front of the train station just minutes down the road from our hotel at about 9am. Breakfast was only served at our pension from 8:30, and I wanted to find an ATM to get cash out as I wasn't sure if we could pay for the tour on card, so we skipped the pension breakfast to get to the train station early enough to find an ATM. It was a cold and drizzly day so we had our jackets and scarves on for the first time in weeks. We had no problems locating the ATM to get cash, then went inside the train station to find somewhere to get breakfast. The first thing we saw when we walked in was a little fast-food type bakery, so I got a chocolate pastry & fruit juice and Andre got a muesli, strawberry & yoghurt breakfast cup. We ended up at our meeting spot with heaps of time to spare.

A little after 9 we were picked up by Phillip in the Quasimodo bus. He had already collected a few people, and we picked up about another fifteen from another meeting point nearby. In total there were around 20 people on the tour, not small but not too big either. The tour ended up being very good. It was all located around the Ypres salient, about 30 - 45 minutes' drive south of Brugge, depending on the weather and roadworks. Phillip and his Australian wife have been running these tours for over ten years (I think he might have even said twenty years?) so he knew a lot about the area and World War I. I had read a lot about the three battles of Ypres and the battle of Passchendaele before we went, but didn't really understand how it all fit together. He painted a perfect mental picture of how the war started, how the Belgians were caught up in it, and the part the battles of Ypres played in it all. 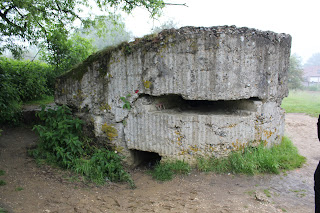 He took us to see Hill 60 where the Australian 1st Tunnelling Company dug and maintained the tunnels below the German front at Passchendaele ridge during the Battle of Messines (featured in the movie Beneath Hill 60). We were able to see a british bunker there, and the remains of a German bunker that has now mostly sunk underground into the muddy clay soil. There are still a lot of undetonated munitions in the ground, so he warned us that we might want to stay to the well-worn path, although there are no fences restricting where you walk. Beside Hill 60 there was an Australian war memorial, which ironically, now bears holes from World War 2 bullets. We also saw several Commonwealth war cemeteries, the largest being Tyne Cot near Passchendaele. 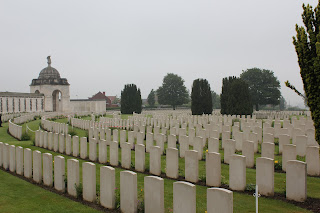 We also saw another at Polygon Wood, the site of a significant battle involving Australian troops, where there now stands a memorial dedicated to the 5th Division of the Australian Imperial Forces, which I thought was the division my great-grandfather's cousin served in, but it wasn't. He was in the 3rd Division, which did still fight alongside the 5th Division in, among others, the Battle of Messines and the 3rd Battle of Ypres, which included the Battle for Passchendaele, the 'suicide mission' where the allies decided to launch an assault on the Germans, rather than the other way round as had been the case for the first two Battles of Ypres (which turned out to be an utter catastrophe). 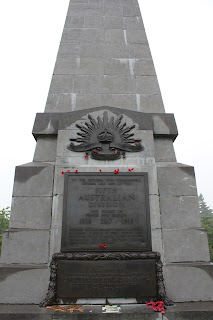 We also saw the Canadian war memorial, 'The Brooding Soldier', possibly one of the best war memorials in Belgium, and the German Langemark War Cemetery. Unlike Commonwealth war gravestones, German gravestones are black rather than white (a condition of the Treaty of Versailles). They also normally lie flat on the ground, not upright, and this particular cemetery is modelled not like a garden (like the Commonwealth ones often are), but is covered in plain grass and tall oak trees, a german symbol for strength. 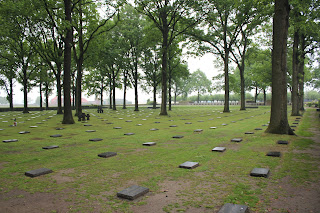 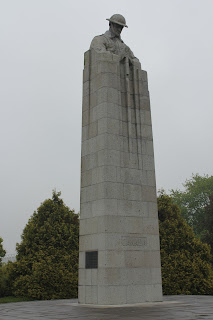 The trip also included a visit to the Hooge Crater museum (the crater itself has since been filled in) where we had lunch (somewhat disappointingly, just a sandwich, but it was included in the price so can't complain too much) and to Ypres where we saw the Menin Gate, engraved with the names of Commonwealth missing soldiers from WWI bar the New Zealanders (who requested their names be recorded at memorials located at the actual battle sites). We also saw one of the few restored trenches in the area and even that has not been very well restored. Our guide Phillip was very critical of the poor effort the Belgians have put in to conserving their trenches and bunkers, in comparison with countries like France that have done a very good job. Belgium has now realised the opportunities they have missed out on and is now scrambling to recover and restore as much as it can (I think he said they are even digging and building new trenches), spending much more than they would have originally if they had just restored trenches and bunkers as they discovered them. I think he said there are only two restored trenches in the Ypres Salient area. 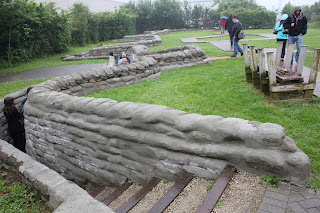 Phillip also took us to a farm off a side-road to show us some of the 'iron harvest', the various shells that farmers still, reasonably regularly, recover from their fields. Belgians recover, on average, 200,000kg of munitions each year, one third of which is still live. They just leave it by the side of the road for the military to recover, which can take a few weeks! As a result, these shells just sit by the road for anyone to come and look at and take photos of. One lady in our group asked, "so how do you know these won't blow up right now?" Phillip looked at her, at the shells on the ground, then back up at her and shrugged and said "I don't really! But they've been there for 90 years and haven't blown up yet so they're probably ok. I wouldn't go throwing them around though!" I loved it because I thought there was no way in the world that would ever happen in Australia! 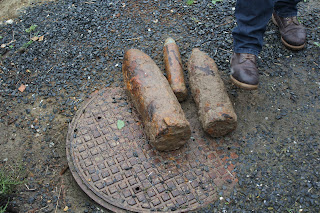 Despite getting very wet feet from walking around in sodden fields in perpetual foggy rain all day, we had a very good trip. Not only did we see some of the most important Commonwealth WW1 sites, but Phillip was very knowledgeable and seemed to know pretty much everything there is to know about Belgium and the Commonwealth's involvement in WWI.

That night we decided to have our anniversary celebratory dinner, and 'went out' for dinner at the restaurant right next door to our hotel. Andre had marinated pork ribs with mashed potatoes, and I had sugared ducks leg served with roasted potato and baby carrots. The ribs were a bit dry, but the mashed potatoes were excellent. My duck's leg was very well cooked, the best duck I've ever had - not at all dry, I kept referring to it as chicken by mistake. The veggies were also very tasty. For dessert Andre had cuberdon ice-cream and I went with what belgians know best and had chocolate mousse. At first we didn't know what cuberdon was, so we asked the waitress who took our order.

It was a very, very familiar flavour, but we couldn't pick it for the first ten minutes or so. It was a pinky-purple coloured ice-cream with crushed musk lollies on top. After a while, I picked it - "fairy floss! The good fairy floss, like from The Show, not the free stuff you get at O-week. Raspberry! Pink raspberry fairy floss!" And that's exactly what it tasted like. The mousse was also very good, though perhaps not quite as set as I'm used to.

Overall it turned out to be probably one of our favourite days out of the entire trip!
Posted by Leah at 10:54 PM