By Tuesday, 5 June, our holiday had essentially come to an end. We were due to return to London for one last night before getting on a plane to go home. We had a relatively early train, so we checked out at breakfast and went straight to the train station. Brugge train station is very easy to navigate and so we found our train without any problems.

From Brugge we took the train back to Brussels, where we arrived about fifty minutes before our Eurostar train back to London was due to depart. We went straight to border control because we knew it would take time as we were leaving the schengen zone (a group of European countries who allow free travel between borders - border control only applies when you are leaving the zone and entering a country not in the zone. Every country we visited was in the schengen zone, except the UK). We had a pretty long queue to wait in, but the staff were efficient and after asking a few brief questions about our travels (how long have you been in Europe, why are you going to London, where are you going after that) we were through. Then we had to queue to get up the escalators to the train platform, and after a bit of a mix-up about where we were sitting (the train came in the opposite direction to what was expected, so our carriage was down the other end of the platform) we were on the train. The people in our carriage took a long time to be seated, so a lot of us were stuck standing for the first ten to fifteen minutes of the trip while people messed around with luggage and seats.

The train ride was fairly uneventful and we arrived in London at about 12, realising after a text message from a friend in London (Sean, who we had met in Rome) that we were arriving just in time for the final festivities of the Queen's Jubilee weekend. If we'd had nothing else to do we would have been able to make it to somewhere along the procession route to see the royal family, however we had to get to Greenwich and check in to our hotel. By the time we recharged our Oyster cards which we'd kept from the last time we were in London, got the train out to Greenwich and checked into our hotel, we decided it was probably too late to get a good place to see the procession. So we just watched it on our TV in the hotel room!

For our last night we had chosen somewhere a bit flasher to stay - a 4 star hotel in Greenwich (which we still got a decent price on through a third party booking website). It was possibly the most comfortable bed we had the whole trip! Unfortunately I had booked it when we thought our flight the next day was leaving at 1pm, so would have plenty of time to get to the airport. However due to Michelle's scenario, we discovered it had been moved to 9:45am, so we would have to leave early to get to the airport on time. If I'd known it was an earlier flight I would have booked a hotel at the airport! 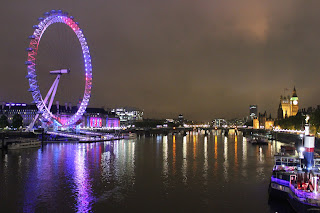 That night we met up with Sean for dinner. He took us to an english pub near Trafalgar Square which served cheap but yummy meals. Again, we stayed up late chatting for hours, but not as late as we had in Rome as Sean had to work the next day and we had to be up early for a flight and hadn't finished packing yet! 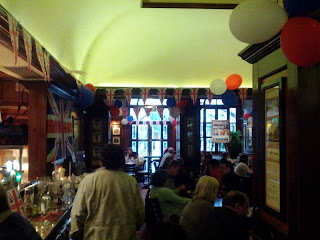 The next morning we were up early to head to the airport. The previous afternoon we'd used an online journey planner to figure out what trains we had to take to be at the airport by 8:45, an hour before our flight was due to leave. Nothing we had told us how early we had to be there, but if we were going to get there much earlier we would have had to wake up at 5! In hindsight we should have allowed more than an hour, but we'd only needed an hour when leaving Australia so I didn't think it would be any different flying out of England.

But of course, did our train get us to the airport by 8:45 as the journey planner said it would? No, it was slow, and only got us there minutes before 9. And then of course we realised that the trains come in to the South Terminal, and Vietnam Airlines operates out of the North Terminal, so we have to catch the light rail to the North Terminal. Fortunately we got to the platform about a minute before the next train came in so we didn't lose too much time doing that. We got to our check-in counter 40 minutes before the flight was due to leave, and of course it was a mad rush - check in had technically closed, so the airline staff rushed our check-in, gave us priority passes and directed us to take our baggage round to the oversized luggage drop-off to be fast-tracked to the gate. Our priority pass got us straight to security where there were only about two other people going through and we arrived at our gate just as they were commencing boarding.
Posted by Leah at 12:20 AM